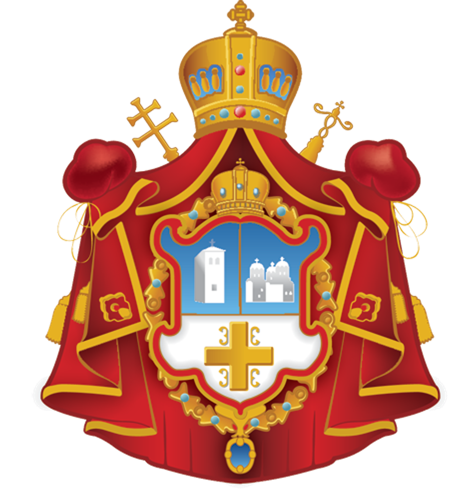 The Orthodox Church is a family of autocephalous (self-governing) churches divided into dioceses headed by bishops which are in turn directed by a patriarch with the Patriarch of Constantinople holding the title “first among equals.” The Orthodox Church, unlike the Roman Catholic Church, is not centralized and headed by a Pope. The unity of the Church is manifested in common faith and communion in the holy mysteries and no one but Christ Himself is considered the real head of the Church. You will find many Orthodox Churches aligned with ethnic groups such as you know Serbian Orthodox Church. (Probably when you tell people you are Orthodox, they automatically know of Greek because of their long-standing Orthodox presence in America. You can help them understand Orthodoxy better by also telling them that your faith, like the Greeks, is unchanging from its beginnings with the only difference being the language used in services.)

You can also help people understand Orthodoxy by explaining that the split which occurred in 1054 occurred because Orthodox in the east (away from Rome) wished to remain pure in their practices as given them by Christ. Essentially, the dispute which caused the “split” centered on church authority and doctrine. The eastern Christians at that time considered all churches as sister churches and considered the Roman bishop as a “first among equals”, our brother bishops. However, the western (Roman) church believed that their bishop had the highest authority over both doctrinal and day-to-day administration for all churches. The western church also believed that the Pope was “infallible”, while the eastern church considered only Christ infallible. Also at odds was the eastern and western concepts of the Holy Trinity. In the Creed (The confession of Faith), the Roman Catholics added words implying that the Holy Spirit proceeds not only from the Father but also “from the Son” The Eastern Orthodox disagreed held that the decision of the earlier Council that “not even one word should ever be changed in the Creed,” maintaining that the additional words changed Creed substantially.

At the time of the spirit (schism is another word meaning the same thing) between Rome and Constantinople, the Christian Church existed in Europe and throughout the Middle East, the Balkans, and Russia with its center in Constantinople which was also called New Rome. Even today, the bulk of its members live in the same geographic areas. Missionary expansion over the years spread into Asia and the West including America, as we learned in our Study of St. Herman. Today, the Orthodox Church is present almost everywhere in the world and is still bearing witness to the true, apostolic tradition.

As Orthodoxy spread, so did monasticism, an important part of its heritage. The first monasteries can be traced to the Egyptian desert in the third and fourth centuries. From there they spread to Palestine, Syria, Cappadocia, Gaul, Ireland, Italy, Greece, and Slavic countries, especially in the Balkans. Monasticism has always been the beacon of Orthodoxy and has made and continues to have a strong lasting impact on spirituality. Remember that monasteries are vital parts of the communities they serve. In our homeland, monasteries not only provide a haven for monks and nuns but also aid victims of the conflict providing food and shelter as well as spiritual direction.

The Orthodox Church today is an invaluable treasury of the rich liturgical tradition handed down from the earliest centuries of Christianity. The sense of the sacred, the beauty, and the grandeur of the Divine Liturgy combine to make the presence of heaven on earth alive and intense. Each Divine Liturgy portrays Christ’s life. Orthodox Art and music also play a vital role in liturgical life helping us sense the spiritual grandeur of Christ’s mysteries. Icons are not simply beautiful works of art commemorating important saints and events, they are a primary means through which we experience the reality of the heavenly kingdom on earth. Remember that we do not worship the icon because that would be a violation of a commandment. Rather we use icons to remind us of a person or an event as a “pathway” for prayer. They are a part of our rich and unchanged religious heritage which links us to the one true and unchanging church.

With all this said, you must be thinking, “I live today. Why is yesterday so important and why should I defend my faith?” The number one reason gets us right back to the definition of “orthodox.” Don’t you respect people whom you feel are “straight, right, and true?” Think about people you admire. What qualities do they share? Aren’t most of them, even if they are very secular in their nature, the people who are the most expert at what they do. How do you think those people become experts? They worked very hard, that’s how! They stayed straight, right, and true to reach a high level of expertise just as we must do to maintain “perfect faith”.

As Fr. Matejic says, “Knowledge about our own Orthodox faith and Church is the best protection from being confused and seduced by sects and cults. Yet, knowledge alone is not enough; we have to Live our Orthodoxy in order to Love it, and we have to Love it in order to Live it. Just to know about it, without practicing it, is only sterile knowledge…The Creed does not belong to you unless you have lived it.” So, if you want a guidebook to keeping Orthodoxy alive, a first step is to embrace the Creed (The Symbol of Faith or Vjeruju) trying to live it as fully as you can. But don’t think it’s really all that simple. Living the Creed takes a lifetime! You repeat it every Divine Liturgy, but read it aloud or to yourself every day until it becomes a part of your lifestyle. The road offered in the Creed is a “straight, right and true” one.

Let’s review the Creed here since it so completely summarizes Orthodox belief.

I believe in one God, the Father Almighty, Maker of heaven and earth, and of all things visible and invisible. And in one Lord Jesus Christ, the Son of God, the Only-begotten, begotten of the Father before all ages. Light of Light, True God of True God; begotten, not made; of one essence with the Father, by Whom all things were made. Who for us men and for our salvation came down from heaven, and was incarnate of the Holy Spirit and the Virgin Mary, and became man. And was crucified also for us under Pontius Pilate, and suffered, and was buried. And the third day He rose again, according to the Scriptures. And ascended into heaven, and sits at the right hand of the Father. And He shall come again with the glory to judge the living and the dead, whose kingdoms shall have no end. And in the Holy Spirit, the Lord, the giver of Life, Who proceeds from the Father, Who with the Father and the Son together is worshiped and glorified, Who spoke by the prophets. In one Holy, Catholic, and Apostolic Church. I acknowledge one baptism for the remission of the sins. I look for the resurrection of the dead. And the life of the world to come. Amen.

If you try to live the Creed as your belief system, then you acknowledge all the miracles of Christ and His Saints and the power of the Holy Trinity and accept them as the models for your own life. From this beginning, you can go as far as your own abilities take you to live a truly Orthodox life. The Creed is our basis of faith which Father Matejic says is “indubitably indispensable for salvation. However, faith without good deeds is inconceivable, or as Apostle James teaches, it is dead. Salvation, although essentially a divine act, presupposes and also includes man’s activity. As fire without heat is inconceivable, so too genuine faith without good deeds is unthinkable. The Orthodox Church believes that we are indeed saved by the grace of God through faith, but that our deeds are the confirmation of our faith. The faith is Seed, and deeds are the Fruit. There is no fruit without the seed, but a seed that brings no fruit is faulty. Salvation cannot be bought at any price, not even by our deeds, yet our deeds are our Yes to the Lord who wants to save us.”

You can say Yes to the Lord every day in little ways trying to “Live the Creed.” Always think before you act or speak. Put others above yourself. Always do your best even when you are feeling like your “best” isn’t “good enough” or that you don’t know how to do something. Even Orthodoxy follows the rule you hear so often in sports, music, or the arts. Practice makes perfect! You are fortunate in that you are being brought up in a tradition that is 2000 years old. There is proof enough that it is the “straight, right, and true” way to live your life. No other way of life has lasted so long. Try every day to have the “Courage to Be Different” and the “Strength to Remain the Same.”

For more information on Orthodoxy, you may contact St. Petka Parish Office